With inflation cutting into workers’ spending power and businesses complaining of staff shortages, you might think now would be the time for a dramatic resurgence in the kind of labour activity Canada has not seen since the 1970s.

But, so far, people who study the trade union movement in Canada say it’s not happening.

Examples of labour activism in the U.S. — notably among Amazon warehouse workers and at the coffee chain Starbucks — have seen only faint echoes in Canada.

Trying to keep up with inflation

Instead, data seems to show that the workers who are keeping up with inflation so far are those who take individual — rather than collective — action to fight for better wages and working conditions: They are switching jobs.

After last week’s seven per cent jump in prices in the U.S., Canadians get an official tally on Wednesday.

While Statistics Canada calculates its consumer price index (CPI) differently here than in the U.S., economists expect our prices will rise a little faster than last month’s 4.7 per cent increase.

A study titled Talent Trends, released Friday by the Conference Board of Canada, shows that costly labour shortages reported by business groups may be creating an opportunity for those who want to switch jobs in search of better pay and conditions.

One of the report’s authors, Lauren Florko, noted that turnover is especially concentrated in three areas: high-tech jobs, health care and manufacturing. It’s not yet clear what is causing people to leave manufacturing jobs, she said, but for the other two sectors, the reasons are quite distinct.

“Why we see it mostly for the science and tech professional areas is mostly because those are jobs that can work from home, and we see that there’s lots of potential poaching,” said Florko.

And demand for tech workers is high not just in Canada, she said, but for Canadians employed remotely by global firms.

In the health-care field, it is more of a case of workers being driven away by burnout during the intense demands of the pandemic, Florko said. Some are switching careers, others are seeking more education.

While wages continue to lag inflation, more turnover is contributing to better wages — simply because new jobs tend to pay more than the ones people leave.

In the case of relatively low-wage workers, the Conference Board study shows that the wage rates being extended in new job offers in 2020 were up by 5.7 per cent, well above the rate of inflation.

People who did not change jobs did not get the same kind of increases, said Florko. 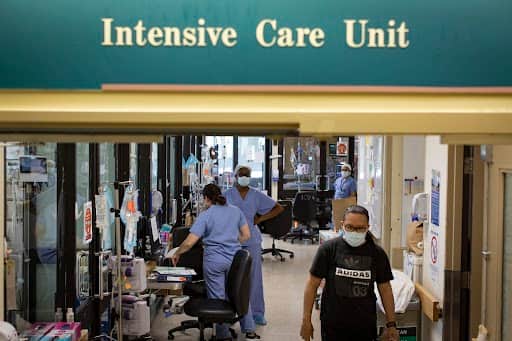 A Canadian Institute for Health Information report that details the high monetary cost of caring for COVID-19 patients also underlines how the complex care that is needed is burning out health-care workers, says Dr. Matthew Oughton, an infectious diseases specialist in Montreal. (Evan Mitsui/CBC) 1:14

Stephanie Ross, co-author of the book Rethinking the Politics of Labour in Canada, has been surprised that after a long period of stagnation in things such as the strike rate and the creation of new union locals, there hasn’t been more of a labour union resurgence to improve pay and conditions.

“There are always groups of workers trying to unionize, but those attempts have not really moved the needle that much,” said Ross, who was recently appointed director of the School of Labour Studies at McMaster University in Hamilton.

According to the Canadian Labour Congress, the largest labour protest in Canadian history was in 1976, when more than a million workers walked off the job as part of a protest against wage and price controls imposed by a federal government trying to combat soaring inflation.

Since around that time, workers have earned a shrinking share of productivity gains.

A study by the U.S.-based Pew Research showed labour’s share of income had not budged in 40 years, while returns to capital soared. Canadian numbers are similar.

Some analysts blame the change on lower levels of unionization. Others blame the decline at least partly on the ability of manufacturers to ship jobs overseas as part of globalization.

“I think there’s a lot of discontent with what’s happening in peoples’ workplaces and that usually does drive labour action,” said Ross.

But it does not seem to be happening in Canada, she said, especially compared to the United States and other parts of the world.

The reason why discontent — and an apparent strong bargaining position for in-demand workers — does not translate into collective labour action is not well understood, said Ross. Perhaps it is because unions have not shown themselves to be good at satisfying those demands in the face of government limits on wage increases.

Or maybe, Ross said, it is because, as a group, workers feel obliged to stay on the job during a crisis, when they are so badly needed.

Instead, individual workers are demonstrating their bargaining clout by quitting and taking a different job, she said.

“That ability to quit does reflect some greater leverage — but it’s a very individual strategy.”

Economists suggest that the process of people quitting and looking for better jobs is good for the economy because it tends to move labour to the places workers’ skills are most needed, increasing the economy’s productivity.

Waiting for the ‘great attrition’

It’s not clear that is happening in health care — at least not yet.

But examples of past protests show they don’t always immediately follow periods of public dissatisfaction, said Lesley Wood, an associate professor at York University in Toronto.

“There may be a lag,” said Wood, who studies something called “cycles of contention,” the sometimes-mysterious process where peasant revolts are preceded by long periods of quiescence or wars following a long period of peace.

If inflation stays high and workers continue to fall behind, it is possible that another cycle of collective action could arrive, even if there are few signs of it now.

But whether workers decide to act — either through unions or individual action — Florko said her research shows that the bargaining clout currently giving them the confidence to quit is not likely to soon disappear.

Despite increasing turnover and the existing shortage of skilled workers in Canada, what Florko’s report refers to as the “great attrition” may only get worse. She said older workers with valuable skills who have delayed retirement during the pandemic are expected to leave the workforce in greater numbers in the coming decade.

“Typically, we see retirements closer to two or three per cent year-over-year — and last year we only saw 1.4,” said Florko.

The federal government is making changes to two of its biggest housing programs in the hope the move...

How affordability could scare off the immigrants Canada wants to retain

When Nicaraguan-born Franco Rayo moved to New Brunswick in 2017 as an international student, he was open to...

More than 200 boxes of records under scrutiny by Ottawa, courts for residential school connections

More than 200 boxes of records are currently under separate court and internal federal reviews to determine...

British Columbians can expect to see more northern lights dancing in the skies over the next three years....